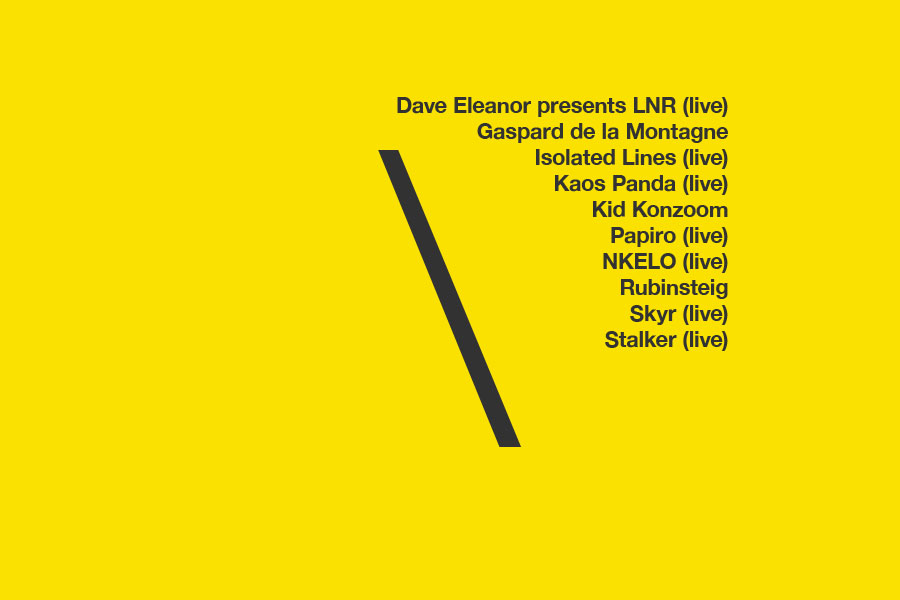 Backslash Festival is delighted to announce the remaining names added to its already swarming line-up. Isolated Lines [Creaked Records / Illegal Alien Records / 47] –Swiss musician exploring dense and rhythmically experimental techno – the man behind the moniker has been involved in band projects, sound engineering jobs and Switzerland’s underground music scene in general for some years. Coming from a background of listening to and playing in rock, indie and noise groups, his tracks are as much informed by the energy and dynamics of live performance and sound science as they are by the endless possibilities of electronic production. So far, they have found a home on established Swiss label Creaked and been picked up by Tommy Four Seven for release on his 47 imprint. Isolated Lines productions are warmly textural and full of subtleties, usually favouring trippy, hypnotic grooves over outright aggression. Whilst most of the detail is consciously designed, Isolated Lines makes music in a way which leaves space for randomness and organic elements; listen to the off-kilter swing of ‘Raze’ or his remix for Gaspard De La Montagne, for example. Especially through a decent sound system, the layers evolve and interact with an exciting air of unpredictability.

As with his studio gear, the live setup is subject to constant change and development. Certain characteristics remain within the sound and the way it is presented though: ambitious arrangements, soaring, euphoric pads and hard-hitting drums. His material is versatile enough for pitch-black basements and early morning festival sets alike. Over the last year it has been performed to acclaim in both settings and will continue to in 2016. Isolated Lines will soon return to Creaked Records, as well as releasing remixes on Adroit, Burst and Ravage. As his music continues to reach a wider, international audience, expect to hear much more of this name. Isolated lines played with : Tommy Four Seven, AnD, Kwartz, Sigha, Midnight Operator, Skudge, The Mole, Dadub, Jeroen Search, Hrdvsion, Kobosil, Hodge, Kangding Ray, Wandler and many others.

Gaspard de La Montagne [Creaked Records] – originally from La Chaux-de-Fonds in Switzerland – grew up with an early interest in the mechanisms of electronic music. After trying various styles and performing in several acts, he’s currently operating in a techno/bass register with cold, dreamy, atmospheres and heavy sub-bass making his productions sound immensely relevant and excitable. Skyr [Abstrah] is a Swiss producer experimenting on electronic sounds. With his analog gears and a lot of field recordings, he will dig into deep atmospheric sounds and hypnotic beats. Papiro [A Tree in a Field Records] is a graphic designer, violin player, and electronic musician, who oscillates loosely between psychedelia, futurism and metaphysics. He’s been around since 1995 and has played hundreds of concerts with different outfits in Europe, Brazil and Japan. Nowadays he performs with his Moog Synthesizer celebrating pure ethereal and occasionally heavy electricity.